Omsk State Medical University is one of the oldest universities of Siberia; it was founded in 1920 as the Medical Faculty of the Siberian Institute of Veterinary Medicine and Zoology which enrolled 186 students. In 1921, West Siberian State Medical Institute was established; and Prof. N.K. IVANOV-EMIN was assigned as the first rector. In 1924, it was renamed into Omsk State Medical Institute.
In autumn 1931, the Maternity and Child Protection Faculty was established which later was reorganized into the Pediatric Faculty. The Sanitary and Hygienic Faculty was founded in 1938 (now it is the Preventive Medicine Faculty). In 1957, there was the admission for the Dentistry Faculty. The fifth faculty established was the Faculty of Pharmacy which started to enroll students in 2002. In 1994, the Institute was granted with the status of State Medical Academy. On the 5th of December 2011, Omsk Medical College was affiliated with Omsk State Medical Academy.  In 2015, the Academy was assigned with the status of University.
THE UNIVERSITY TODAY
Today the University is one of largest medical universities in Siberia. OSMU is constantly ranked among 100 best universities of Russia.
EDUCATION
For decades the University has trained more than 35 thousand doctors.  Its graduates work in all regions of Russia, as well as in CIS and non-CIS countries.
The training of specialists is carried out in the following fields: General Medicine, Pediatrics, Preventive Medicine, Dentistry, and Pharmacy, including the programmes of pre-university and postgraduate education. OSMU College trains the specialists in General Medicine, Nursing, Laboratory Diagnostics, and Pharmacy.
‘PATHWAY’ TO PROFESSION
The University curriculum is designed to ensure students meet the necessary standards in terms of knowledge, skills and attitudes that new doctors should have. Its distinctiveness is that it has been designed to allow diversity and integration. Diversity is intended to mean allowing students with different personalities, aspirations, preferences, learning styles and strengths and weaknesses to be successful, to enjoy their undergraduate time, and to be able to build on these experiences during postgraduate training. It is recognized that career options for doctors have never been greater, and although the Academy’s primary aim is to deliver competent trainees.
This enables students to devise a ‘pathway’ that concentrates on research, community practice, a particular specialty, or on breadth and general experience.
Clinical work is the most essential part in the medical education. Clinical Departments are located at 35 key largest hospitals in Omsk:
All leading hospitals are perfect places for professional training of students. Hospital facilities are corresponded to the requirements for the education process according to declared professional programs. The faculty of the University has paid a great attention to development and adoption into clinical practice modern alternative technologies, such as up-to-date preventive measures, new diagnostic techniques, and new treatment modes.
OSMU faculty has been working together with physicians, providing consultations in severe and complicated cases, later discussing these cases on the general planned meetings. Professors of the clinical departments have been scientific advisors of the physicians during their research. The results of such productive and collaborative activity are joint articles in scientific journals, and participation in Russian and International Conferences and Congresses.
CLINICAL SKILLS CENTER
The Clinical Skills Center is an educational and assessment resource designed to support the learning objectives of OSMU. Based in the Clinical Performance Education Center, the Clinical Skills Center recruits and trains simulated patients (SPs) for instructional and assessment exercises. We are dedicated to providing quality instructional and assessment programs to medical students, residents and other health care professionals.
The mission of the Clinical Skills Center is to facilitate the general patient-centered medical curricula with sound educational activities. Using simulated patients, these activities are designed to enhance, reinforce, and/or certify clinical skills within the undergraduate curriculum of the University. In addition, the Clinical Skills Center hosts Graduate Medicine Education, and Continuing Medical Education in specific clinical research, learning and assessment initiatives.
LIBRARY
Current library stock includes about 600 000 volumes including periodicals, e-editions in medicine, natural sciences, social and humanitarian science and belles letters. There are volumes in specialties of general medicine, pediatrics, preventive medicine, dentistry and pharmacy in the library stock. The library receives 262 both Russian and foreign periodicals, 150 of them belong to medical sphere.  There are editions in Latin, German, English, French and others in foreign literature stock.
The library provides the service for students and teaching and academic staff using all arsenals of library forms and techniques.
Promotion of new editions is realized by pictorial and oral means to assist in studying process, research activities and contemporary issues.
Over 100 book exhibitions and various literary and musical evenings are organized annually.
Informational and bibliographical services are provided in all subdivisions of the library.
The library offers both traditional and electronic reference media, bibliographical editions, library catalogs and card-registers, databases for any information retrieval.
The e-reading hall is also open for the Library visitors.
RESEARCH
Basic Research Guidelines
Research is coordinated by the University Senate, 8 Problem Solving Committees, Department for Research, the Students’ Scientific Society, Department of Patents and Inventions, 4 Scientific Councils and the Ethic Committee.
Young scientists of OSMU are permanent participants and winners of the U.M.N.I.K. contest.
INTERNATIONAL COOPERATION 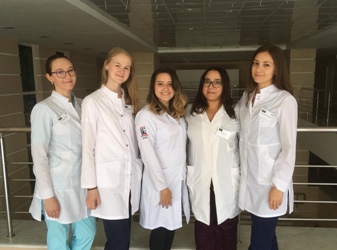 International activity in OSMU was launched in 1997 when the University became a full member of IFMSA (International Federation of Medical Students' Associations), where Russia is represented by the National Union of Medical Students. In 2007 the National Union of Medical Students was joined the International Association of Dental Students (IADS), which allowed Russian dental students to take part in international exchange programmes. Every year, within IFMSA and bilateral agreements with partner universities, OSMU students do an internship in the leading foreign clinics. In our turn, we host foreign students in OSMU hospitals.
Since 2007 we started actively working with DAAD programmes and in winter 2008 OSMU won DAAD scholarship for a study tour to Germany for a group of 14 students for 2 weeks. The programme of the study tour in Germany was extremely rich and included visits to higher educational institutions and major leading clinics:  Charité, Emergency Hospital, and Clinic for Oncohematology in Berlin; Clinic of the Faculty of Medicine at the Friedrich Schiller University, Jena, and the Clinic of the Faculty of Medicine at the Dresden Technical University.  In April 2013 the second application was approved, and 15 students of OSMU got acquainted with university clinics in Bonn, Dusseldorf and Bochum. 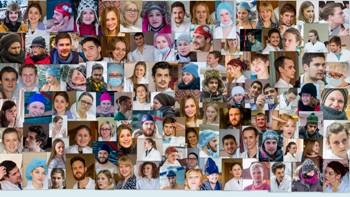 International School on Reproductive Health of Adolescents has become a brand of the University since 2015. The first School hosted twelve medical students from Ruhr-University Bochum (Germany). It was the first experience of such cooperation for both parties. The Second International Winter School 2016 Reproductive Health of Adolescents was traditionally held in February, the interest in which was also huge, and the participants expressed their warmest thanks for the high level of organization and relevance of the chosen subject, for the high professionalism of our lecturers, for the clinical cases and unique operations presented. The Third International Winter School 2018 welcomed students from different countries including Japan, Croatia, Israel, Germany, France, Slovakia, and Ukraine. 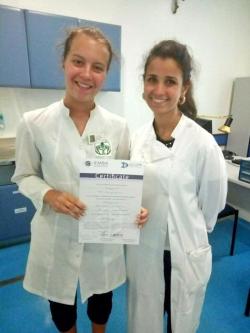 First Medical Schools allowed expanding the fields and target audience for the future Schools. Thus, in September 2018 the First International Autumn Linguistic School Professional Communication without Borders: Quo Vadis? for the teaching staff was held. And in July 2019 in conjunction with the Omsk State Agrarian University, the First International Summer School The Challenges of Functional Nutrition in the XXI Century: A Cross-Disciplinary Agro-Medical Approach was held. The aim of the School was to provide students from both agrarian and medical universities with state-of-art, cross-disciplinary knowledge in the field of organic food and functional nutrition.
Since April 2014 new agreements in healthcare, academic, scientific and cultural cooperation between OSMU and Astana Medical University, Kazakh-Russian Medical University, Almaty, Asfendiyarov Kazakh National Medical University, Almaty, the Republic of Kazakhstan and B.N. Yeltsin Kyrgyz Russian Slavic University, the Republic of Kyrgyzstan, were signed.
In July 2015 OSMU joined the Association of Sino-Russian Medical Universities, aimed at organization of international cooperation in academic, research and medical activities. Due to this membership in October 2017 the Agreement with Xinjiang Medical University (China) was signed, and in February 2019 the delegation of Xinjiang Medical University visited OSMU to carry out a comparative study of the system of higher medical education in Russia and in China based on the examples of two universities followed by an idea for a joint research project (Russia – China) in the field of medical bioethics. 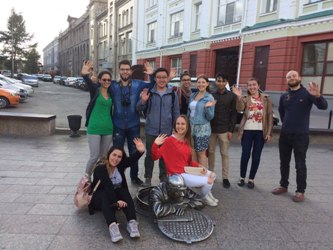 In September 2014 the Center for Linguistics and Cross-Cultural Professional Communication was established as a sub-division of the International Affairs Department aimed to ensure life-long language learning in a medical university to integrate Russian medical specialists into European and world information and educational space.
The Center offers the following modules:
International cooperation is strengthening to implement new plans, ideas and projects.
STUDENTS’ LIFE
Non-resident students studying at the University will be offered an accommodation in one of the student dormitory of the University. Rooms are furnished and are for 2-3 persons.  The University has 6 dormitories.
The University provides a canteen service; typically breakfast, lunch and dinner are provided during the week and a reduced service operates at the weekends.  Food is typically of a reasonable standard, with several options, and fairly cheap.
This life allows all students to bring their talents to light. Its cameo theatre Agar and dance ensemble Inspiration are quite famous. There are a lot of sports clubs for those who like doing sports. The University has its own sports and recreation facilities in the suburban recreation area.
The Healthy Lifestyle is a motto of University.
SPORTS FACILITIES AND LEISURE TIME
As with most facilities, sports provision varies greatly between Medical Universities and Schools. Typically, you will have free access to football, basketball, rhythmic gymnastics, and a gym. University has its own swimming pool.
The Leisure Centre is one of the largest dry leisure complexes. The centre boasts 2 standard sports halls, a single court gymnasium, a fitness centre, and dance studio.
The Omsk State Medical University is an owner of the health farm, which is situated in the fantabulous place about 60 km out of Omsk. The health farm is surrounded by pinery and closes enough to the Irtish River. During a year our students and employees have a lucky chance to enjoy a weekend at this marvelous place.
Here are some links that might be interesting to you. You can find more information about Omsk, places to visit, local news, etc. both in English and Russian.