Congratulations on Successful Participation in the Olympiad! 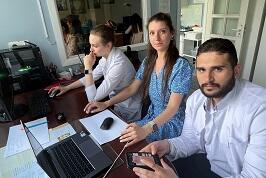 The IV National Online Student Olympiad on Digital Orthopedic Dentistry dedicated to the memory of Prof. Vadim N. KOPEYKIN, MD, PhD, Corresponding Member of the Russian Academy of Medical Sciences, Honored Scientist and Honored Doctor of the Russian Federation, was held in May 2022. The event was organized by the OSMU Department of Orthopedic Dentistry, including Prof. Andrey A. STAFEEV, Prof. Assoc. A. V. KHIZHUK and Prof. Assoc. R. Sh. KASENOV, in collaboration with the Orthopedic Dentistry Department of RUDN University (Moscow) headed by Prof. Igor Yu. LEBEDENKO.

OSMU was represented by two teams: a team of residents (Ekaterina KORNEEVA and Daria TIMOKHINA), and a team of 4th-year students (Artur VARDANIAN and Maria MASHINSKAYA).

The Olympiad was preceded by preliminary stages, where the modern 3D visualization software «AVANTIS 3D» was tested on computers with different capacity levels. While exploring the Program, the participants had an online chat with Prof. RYAKHOVSKY, the creator of the program.

Later, all teams were to solve tasks, including building a 3D-scene of a virtual dental appointment, making a diagnosis, and planning dental rehabilitation. The competent jury conducted a full analysis of 3D-scenes built by the participants, analyzed the treatment plans in accordance with the diagnoses, and evaluated clinical reasoning of the participants.

In conclusion, Prof. LEBEDENKO announced the winners in the overall competition and in the nominations. The OSMU team became a winner in the «Building a patient model» and «Diagnosis and treatment protocol» categories. The team of OSMU residents became an absolute winner of the Olympiad!

We congratulate winners and their supervisors, who once again proved the high level of knowledge and skills developed in our Alma Mater in the Department of Orthopedic Dentistry.