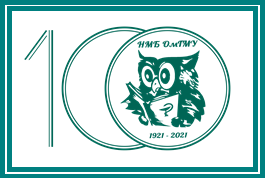 OSMU has hosted the National Scientific Conference with International Participation «Library in the Information Space of Higher Education Institutions: Traditions and Innovations», dedicated to the Centenary of OSMU Library.

The speakers focused on the following themes: the profession of a bibliographer in today's world, innovative trends in the modern University library, and the role of the educational e-environment in the reorganization of the University library during the pandemic.

During the plenary session, Prof. Maria A. LIVZAN, OSMU Rector, and Prof. Andrey V. PISKLAKOV, Vice-Rector for Research, Head of the Department of Pediatric Surgery and Reproductive Health for Children and Adolescents, welcomed the guests.

Boris R. LOGINOV, Director of the Central Scientific Medical Library of Sechenov University, shared his thoughts about the future of scientific libraries. Regulatory issues of University libraries in the state regulation of higher education were covered by Galina A. SPITSKAYA, Advisor to OSMU Rector. Tamara V. BERNHARDT, Prof. Assoc. of the Department of Russian and Foreign Literature at F.M. Dostoevsky Omsk State University, told about the labor market requirements for library specialists according to sociological research. Lyudmila V. LUZYANINA, Director of the OSMU Library, presented her report on the history of the library.