The Interregional Interdisciplinary Scientific Conference «Controversies in Obstetrics and Gynecology» 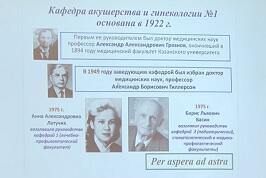 The Interregional Interdisciplinary Scientific Conference «Controversies in Obstetrics and Gynecology» was held on September 23, organized by the Ministry of Public Health of the Omsk Region, Omsk Association of Obstetricians and Gynecologists, and Omsk State Medical University.

V.M. KULESHOV, MD, PhD, Prof. of the Department of Obstetrics and Gynecology, Novosibirsk State Medical University, has visited the Conference as a guest of honor. He presented two reports: «Modern management of uterine myoma» and «Adhesions in gynecology. Realities and prospects».

The Conference became a platform for the exchange of opinions and outcomes of research. I.V. SAVELIEVA has raised the issue of the importance of the profession in her report on preventive obstetrics.

T.V. KLINUSHKOVA, MD, PhD, spoke about the significance of dienogest in the treatment of endometriosis with a focus on the national approach.

O.A. TSYGANKOVA, MD, PhD, Prof. Assoc. of the Department of Obstetrics and Gynecology №1, talked about ways to improve the effectiveness of the treatment of vaginal infections.

The final report about endometrial diseases in reproductive age was presented by I.V. SAVELIEVA together with N.V. NOSOVA and P.V. DAVYDOV, Prof. Assistants of the Department.

The vivid discussion showed that the problems raised at the Conference are highly relevant. Modern gynecology is a fast-developing field, famous for its latest scientific developments, research, and technology.