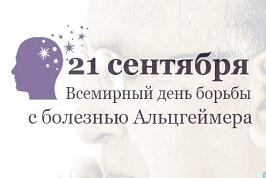 World Alzheimer's Day was first marked on 21 September 1994 at the opening of ADI's annual conference in Edinburgh. On this day, health organizations around the world hold events to raise awareness about the disease, its causes and methods for prevention, and support relatives caring for those who are ill. OSMU joined the action and had a talk with Roman A. DELOV, Prof. Assoc. of the Department of Neurology and Neurosurgery.
In Russia, more than 1.5 million people suffer from dementia, and at least 44 million people are affected worldwide.
- Alzheimer's disease is a common type of dementia, a progressive condition when the patient suffers from memory loss, cognitive and behavioral impairments. This disease dramatically changes the life for patients and their loved ones, that is why information and support must be available to everyone involved. No one should fight this battle alone, - said Roman A. DELOV.
Currently there is no treatment to stop the progression of Alzheimer's disease, but there are drugs that can reduce the symptoms of dementia. In the past three decades, researchers achieved a major success in understanding the disease, but plenty of questions remain unanswered. OSMU is also making its scientific contribution to this issue.
What do we know about the causes and risk factors of Alzheimer's disease?
- Recent studies have led to better understanding of the risk factors, such as age and genetics. The history of cardiovascular diseases, craniocerebral trauma can also play its part in disease progression. Researchers have also found a correlation between fewer years of academic education and an increased risk of Alzheimer's disease and other dementias.
What are the targets of modern drug therapy?
- We believe that there are still many unexplored targets. Dozens of ongoing clinical trials aim at creating an effective drug therapy. However, changes in a patient's behavior is a significant problem which cannot be fully improved with medication. Adapting a patient's life to the new realities takes strength and great effort from caregivers. Today, many resources are available for relatives to help manage comorbid conditions, coordinate healthcare services, and participate in mental recovery.
To all whose families have people with dementia, I wish you endurance and patience. Taking care of loved ones with Alzheimer's is not always easy, but your help and support is priceless for them! – said Roman A. DELOV.
OSMU Press Center